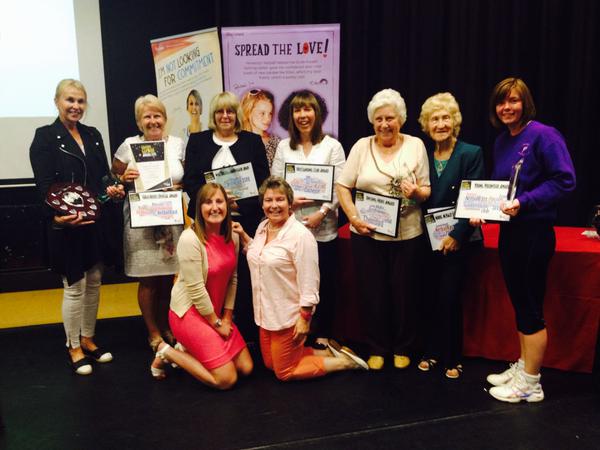 Netball East Celebrate with its Volunteers

The East Regional Assembly and Goalden Globe presentations took place on Saturday 13th June 2015 at the Cambridge Regional College, Cambridgeshire.  Although the day started with dark clouds and heavy rain, this did not dampen the spirit of all the nominees and guests who turned up for the occasion.

The day kicked off with a Mavericks coaching workshop led by, Olivia Murphey, Amanda Newton and Mel Mansfield.  The workshop was well attended and enjoyed by all.

The workshop was followed by lunch where the nominees, guests and east region members joined for lunch and refreshments where everyone came together to share and celebrate the occasion.  Lunch was followed by the East Regional Assembly and Goalden presentations. This proved to be a great year for Essex, as they swept the board taking home an award in every available category.   Guests presenting the awards, included, Joanne Adams (Interim EN CEO), Cheryl Danson (East Regional Chair), Jan Burke (EN HLM), Brian Worrell (EN HLM) and Maggie Jackson (EN HLM).

Goalden Globe winners are:
• Officiating Award – Debbie Hands – “I’m Gob smacked, honoured???”
• Outstanding Club of the year Award– Kats NC – “I’m very Proud and happy to give big opportunities to adults and children to play netball”
• Coach award- Kate Humphreys – “I Love netball and it has helped me through lives up and downs, it is very nice to be recognised from Netball East”
• Chris Harpham / Young Volunteer Award– Steph Collinbourne – “I love netball and this award means everything to me, it will be nice to celebrate with the other winners at the national awards”
• Muriel McNally Award– Jeanne McCann – “I get my reward weekly from all my kids but this just top it off”
• Mary Bulloch Administrator Award– Mandy Hales – “I’m so proud and honoured, after 39 years within an administration role within the league, it also helps our celebrations of 50 year of Essex netball”
• Unsung Hero Award– Beryl Webb – “I’m thrilled to have been nominated and I could not have done it without my family support and all netballers become a friend too”

Recognition was also given to the athletes from the East Regional and Regional Performance Academies, with guest George Fisher (EN U21 squad), congratulating and presenting the awards in this category.  Recipients of the awards are: